The Bridesmaid Suburbs In Sydney That Are Coming Out On Top

Being a bridesmaid is special, right? You are one of the chosen ones. You throw the hens night. You stand out from the crowd. You look after the most important person - the bride - on one of her most sacred of days... Oh, I get it now.

Perhaps that’s why the word bridesmaid has become synonymous with plan B. The one who always plays second fiddle, never quite achieves their goals or just can't climb to the top of the pecking order.

Now, that term has been further appropriated as a way to describe more affordable real estate. “Bridesmaid” suburbs is a trend that’s emerged in the housing market that reflects widely differing property values in neighbouring areas.

According to realestate.com.au buyers can save truckloads of cash by ditching their dream suburb and moving just one postcode over, and average prices in some bridesmaid suburbs are up to $1.5m lower than their bridezillas next door.

Some locations have simply flown under the radar while fashionable nearby neighbourhoods flourished, and as savvy buyers seek more affordable alternatives, they’ve emerged from the shadows with lower demand and far better prices. For instance, you could save over half a million dollars by choosing an apartment in Homebush West over neighbouring Concord, and almost a million dollars just by swapping a house in Cronulla for one in nearby Caringbah.

The northern beaches showed some of the biggest price discrepancies according to the Realestate.com.au report. Suburbs including Miranda, Lalor Park, Asquith, Tempe and North Ryde also proved much better value than nearby suburbs for similar properties, while still sharing many of the same coveted attributes.

“In some of these locations, I would say they’re worth saving the money... you can enjoy some of the amenities that the blue-chip suburbs have,” Realestate.com.au chief economist Nerida Conisbee said.

Sydney’s premium eastern suburbs offer the most extreme savings with houses in Bondi Junction around $3m cheaper than the exclusive Bellevue Hill enclave up the road and, somewhat surprisingly, Bondi houses about $2.37m cheaper than those up in Vaucluse.

Here are the Bridesmaid suburbs where you can save big bucks: 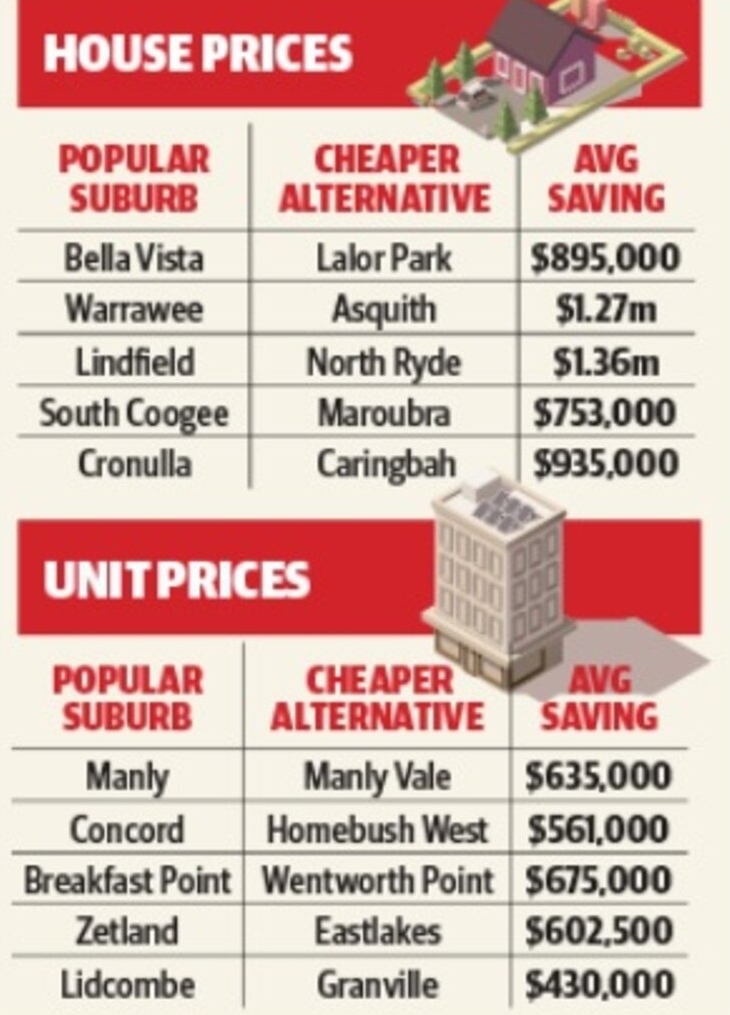