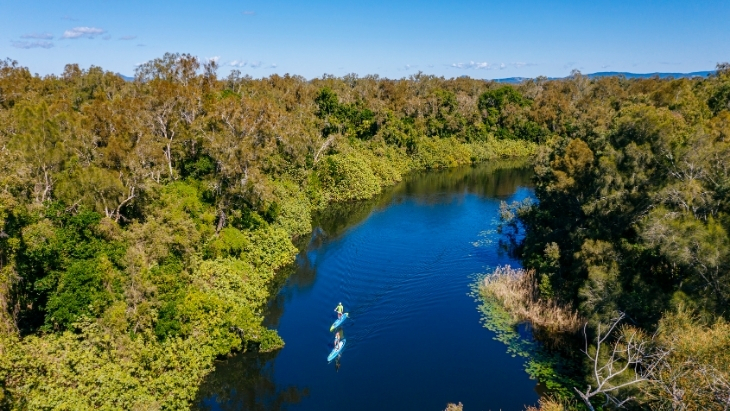 Australia boasts a glorious treasure trove of natural treasures, so it should come as no surprise to learn that of the two rare everglade systems on the planet, we can lay claim to one of them.

Where is the Noosa Everglades?

The stunning Noosa Everglades is a 60-kilometre stretch of wetland and wilderness in the upper depths of South East Queensland's Noosa River.

Throughout the aquatic wonderland, pristine waters flow down narrow estuaries and a splendid menagerie of flora and fauna are residing on its banks and within its rainforest. This unique hidden gem is one of Australia’s most diverse ecosystems and so dazzling is the crystal clear reflection of the water, that the Everglades has been nicknamed the River of Mirrors.

The Noosa Everglades’ stretches across two UNESCO Biosphere Reserves - the Noosa and Great Sandy - with its entire upper catchment protected in National Park. More than 40% of Australia's bird species can be found here.

Despite being a bonafide paradise for photographers and nature-lovers, the dreamy landscape remains relatively untouched. However, it is easy to access and a beautiful place to explore by foot, boat or kayak. Noosa is also the only everglades system in the world where you can safely swim and you can soak in the healing power of tea tree infused waters.

You can experience the breathtaking wonder of the Everglades with guided and self-guided tours. From half-day adventures to overnight safaris, you can explore the ancient waterways of this pristine region.

Kayak tours leave from Boreen Point (about 25 minutes drive from Noosa Heads) and boat tours leave from Elanda Point. If you are bringing your own boat, head into the upper reaches of the Noosa River travel through the lakes system.

Awarded Australia’s Best New Tourism Business in 2020, habitatnoosa hosts eco-camping facilities across 65 acres of natural bushland in the Noosa Everglade. In a serene, natural setting just 25 minutes north of Noosathere is an abundance of lush green space and over 500m of beachfront on the Noosa River, for a breathtaking family holiday.

Uniquely nestled in the National Park, the campground is undergoing extensive revitalisation on a path to becoming a world-class eco-tourism precinct and now boasts onsite cabins, camping, motorhome and glamping accommodation plus a suite of renovated amenities including new toilets and showers and a renovated camp-kitchen. There is also CootharaBAR (serving local fare), a microbrewery and a kiosk.

habitatnoosa is also home to a large population of resident eastern grey kangaroos!

Unpowered campsites start from $33 per night in low season and from $43 per night in high season. There is also a range of cabins and tents.

These Cotton Candy Caves Are The Perfect Hidden Gem
Lake Cakora: NSW’s Tree of Life Lake
From Sinkhole To Secret Garden: Umpherston Is A Hidden Wonder